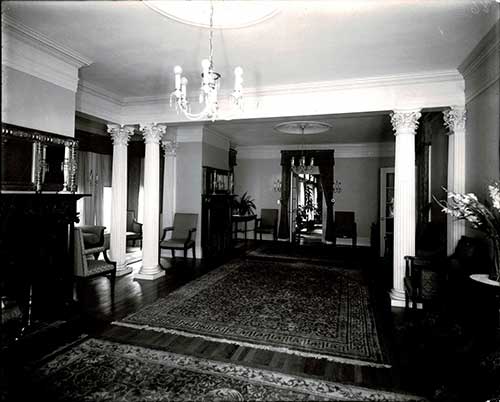 Initially two rooms, the Blaines removed the interior wall and added the Corinthian columns and the large bay window. The blue and gold color scheme of the Reception Room was inspired by the Maine State Flag. It is matched by drapery fabric comparable to that used in 1919. The two fireplace mantles of black figured marble are believed to be original to the house. The Hepplewhite inspired chairs are covered in blue Scalamandre damask. Three significant Maine paintings recently added to this room are "The Rocky Coast of Maine" painted by Harrison B. Brown in 1877, "Portland Head Light" of 1900 by George McConnell, and "Delano Park, Cape Elizabeth," a 1904 work by John Calvin Stevens. In the Blaine era, Mrs. Blaine used the space for dances and dinner parties. Today, the reception room hosts a myriad of Maine non-profit clubs, organizations and groups for presentations and teas as well as the Governor’s esteemed visitors.