The final construction by the Blaines were the Study and the billiard room, both in an octagon shape that belies the straight exterior. The study is decorated with wallpaper that replicates a pattern which Blaine copied from Abraham Lincoln's White House study. Harkening back to its original construction, the whale oil chandelier has been preserved but electrified for modern times. Furnishings include the handsome mahogany desk and chair Blaine used as a member of the United State Senate, bookcases which fill one wall and contain many of the statesman's books, and an inkwell surmounted by a seated statue of William Shakespeare. Above the fireplace hangs an engraving of Francis B. Carpenter's painting depicting Lincoln reading the Emancipation Proclamation to his Cabinet. Encased in a glass frame attached to Blaine's Senatorial desk is a Blaine House treasure -- a small card dated April 7, 1865, allowing "the bearer Mr. Blaine to pass from City Point to Richmond and return," signed A. Lincoln. President Lincoln was assassinated just eight days later. Today, this room really maintains the history and heart of the Blaines’ legacy in the home. 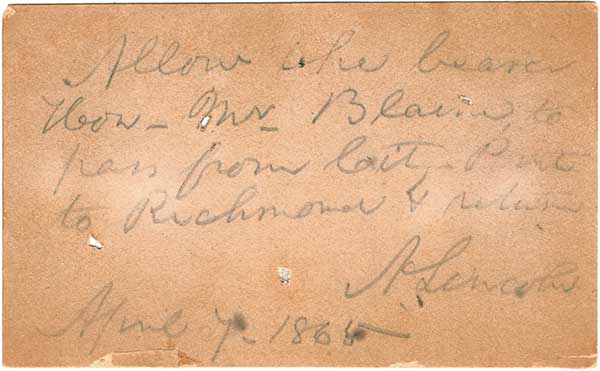