Gorham Silver made this set of serving dishes for the US Navy in 1895. Matthew Nicholson, in the employ of jewelry firm Henry P. Lowell of Augusta, engraved the set. In the late 1800s, the Navy commissioned silver for each captain’s quarters. Maine had been a “dry” state (where liquor was not allowed) since 1851. The story is told that, although the ship had no direct affiliation with the state of Maine, the Navy commissioned a soup tureen and two vegetable dishes rather than a punch bowl for the USS Maine in acknowledgment of this. In fact, however, Navy ships were also “dry” at the time the silver was commissioned.

The USS Maine exploded and sank in Havana Harbor on February 15, 1898, setting the stage for the Spanish-American War. The silver was recovered from the wreck of the ship, cleaned, and repaired. The Navy sent the tureen and vegetable dishes to the State of Maine, together with a silver loving cup with antler handles, that Mainers living in New Orleans had given to the captain of the Maine a few years before the explosion. In the 1990s, the Navy commissioned the nuclear submarine USS Maine (SSBN741A). At that time, the Navy donated this silver set to the people of Maine. The new Maine sails with the loving cup with antler handles. 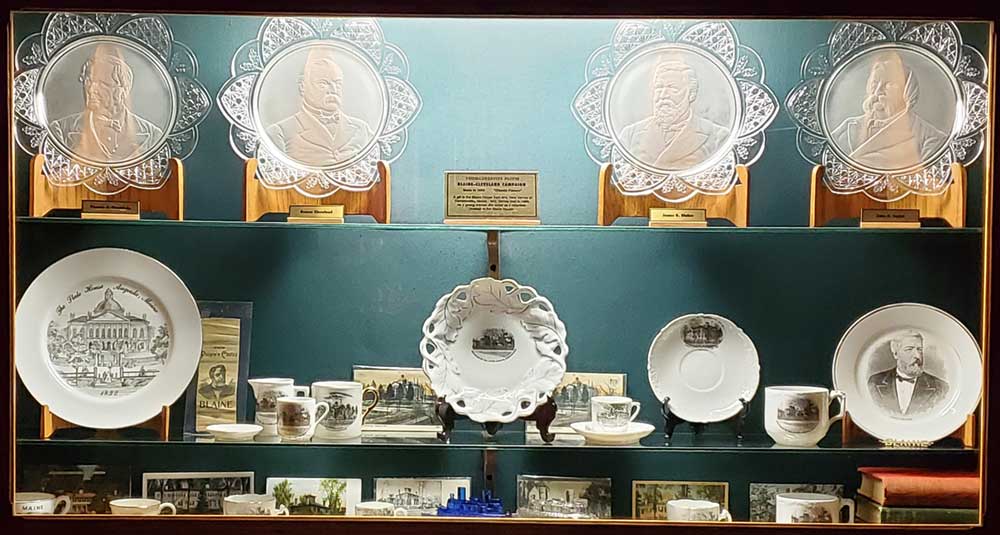 A case in the Blaine House Billiard Room includes commemorative dishes from the late 1800s and early 1900s, picturing the Blaine House, Maine’s State House, and the original U.S.S. Maine. It also holds a pin and a ribbon from Blaine’s unsuccessful 1884 presidential bid. A set of four glass dishes feature the four candidates from that race: Blaine and Grover Cleveland, and their running mates John Logan and Thomas Hendricks.