Frederic Wingate of Augusta created this clock in 1806. On the face is the number 15; it was one of the earlier clocks Wingate made. A Massachusetts native, Wingate moved to this area not long before he made this clock. Clockmaker Benjamin Swan was his apprentice. MSM 2007.21.1

An inscription inside the case door of this clock reads, “With affectionate regard this clock is presented to Emma Chase Milliken, wife of Governor Carl E. Milliken, the first lady to occupy the Blaine memorial governor's residence of the state of Maine at Augusta, 1919-1920.” Carl Milliken served as governor from 1917-1921. The clock was made by Bigelow, Kennard and Company.

This dwarf tall-case clock may date to the Blaine's residence in the house in the late 1800s. Early inventories simply note that clocks are present, but do not describe them. This mahogany clock features an arch-molded top, 3 brass finials, and incised gilded decorations, with quarter columns on each side of the main case, Hepplewhite-style feet and a shaped apron. The face is painted with Roman numerals and a Latin inscription and has designs in gold toward the bottom of the face. 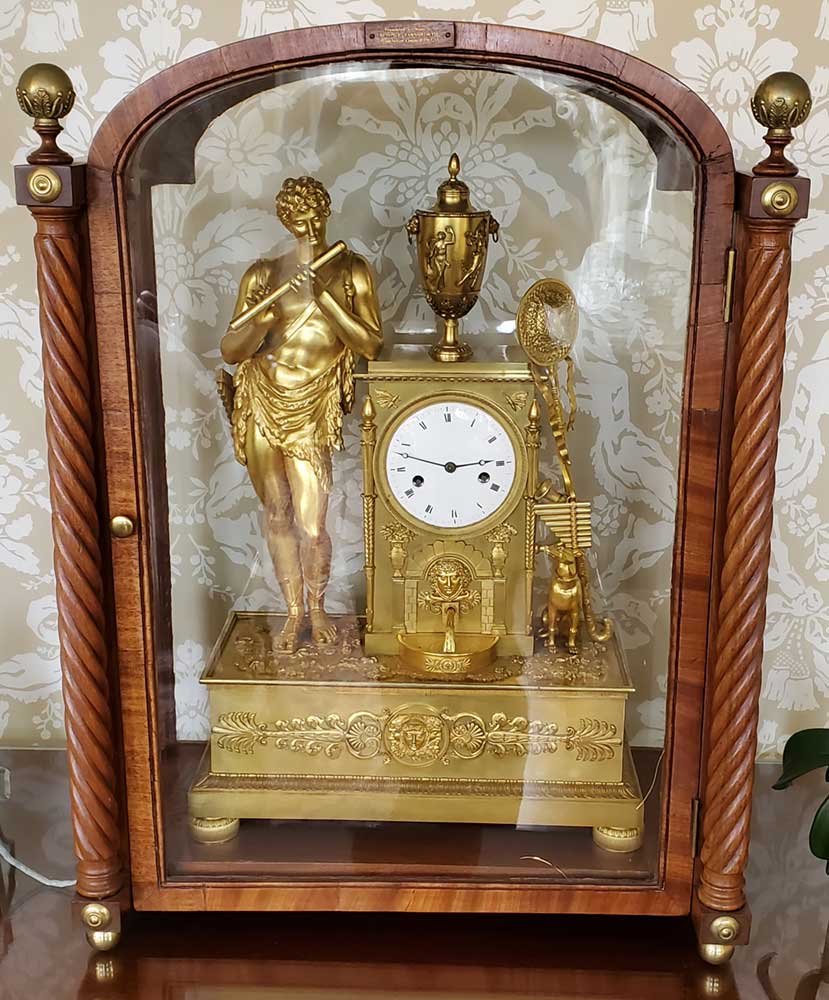 Many ormolu clocks from the late 1700s and early 1800s featured characters from Greco-Roman mythology. This example features a shepherd, who may be Apollo or Endymion. He is depicted with his crook and his dog, as well as with a flute, a hat, an urn, and a pan pipe.

The term ormolu refers to the method of applying a mercury-gold amalgam to bronze. The mercury is later burned off in a kiln, leaving a coating of pure gold. This fire-gilding technique was outlawed in France in 1830, because of its toxicity. However, gilt bronze items such as mantle clocks continued to be very popular throughout the 1800s.

Alton E. Farnsworth, who owned and operated a fish cannery in Southwest Harbor, Maine, gave the State this clock to be displayed at the Blaine House. The frame bears a small plaque reading “Presented to State by / Alton E. Farnsworth / Member of Council 1917-18.”