Augusta State Hospital from the River 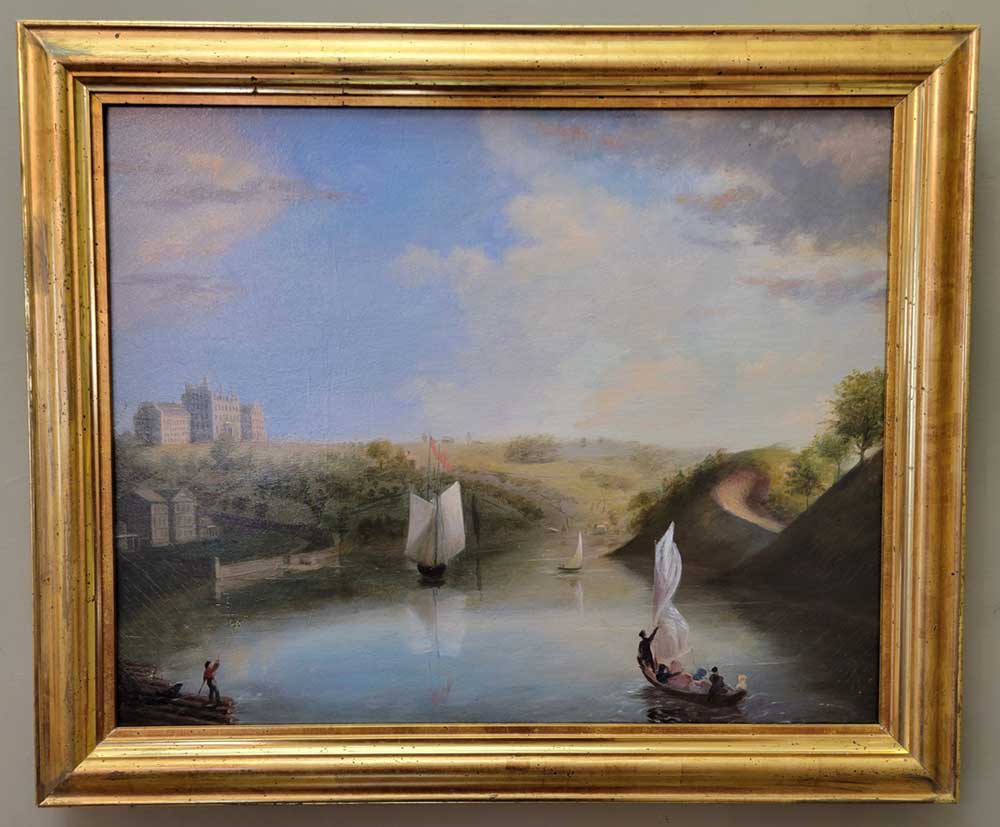 Augusta State Hospital, later called the Augusta Mental Health Institute, is featured in the background of this painting. The hospital’s location, directly across the Kennebec River from the State House, was planned to ensure that it would never be forgotten by the governor or legislature. At the time this painting was completed, the State Hospital was called Maine Insane Hospital. It was built of Hallowell granite and opened its doors in 1840. The painting is attributed to Charles Codman, a Portland artist who died in 1842. The first owner of the Blaine House, Captain Hall, would have seen rafts of his logs on the river, similar to those in the lower left of the painting. 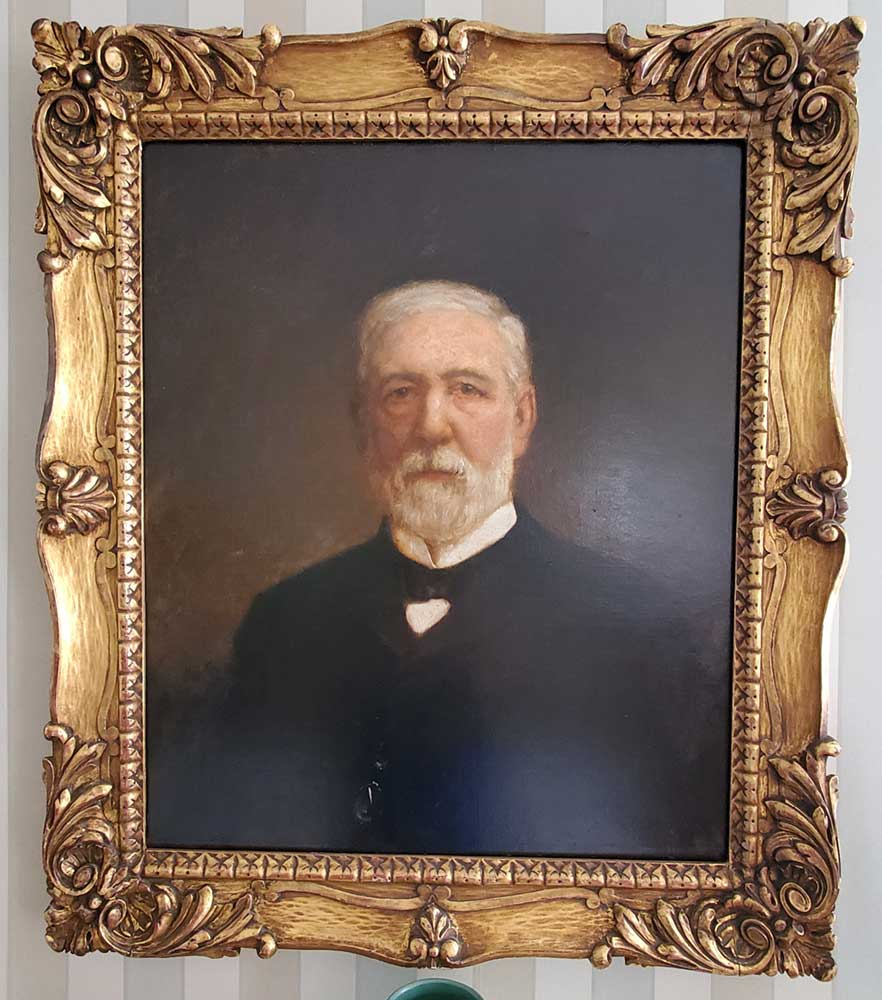 A Pennsylvania native, James G. Blaine came to Maine as editor and co-owner of the Kennebec Journal. He found his calling in politics and had an influential career as a United States Representative, Senator, and Secretary of State.  In 1884 Grover Cleveland narrowly defeated him in his bid for the U.S. Presidency. His family gave Blaine’s home to the State in 1919 to serve as the home of Maine’s governors.

August Reinhold Franzen painted this portrait of James G. Blaine in 1911, eighteen years after Blaine’s death. Franzen was born in Sweden in 1863. He studied art in Sweden before coming to America to become a U. S. citizen, living in New York City. He died in 1938 and is buried at Père Lachaise Cemetery in Paris, France. 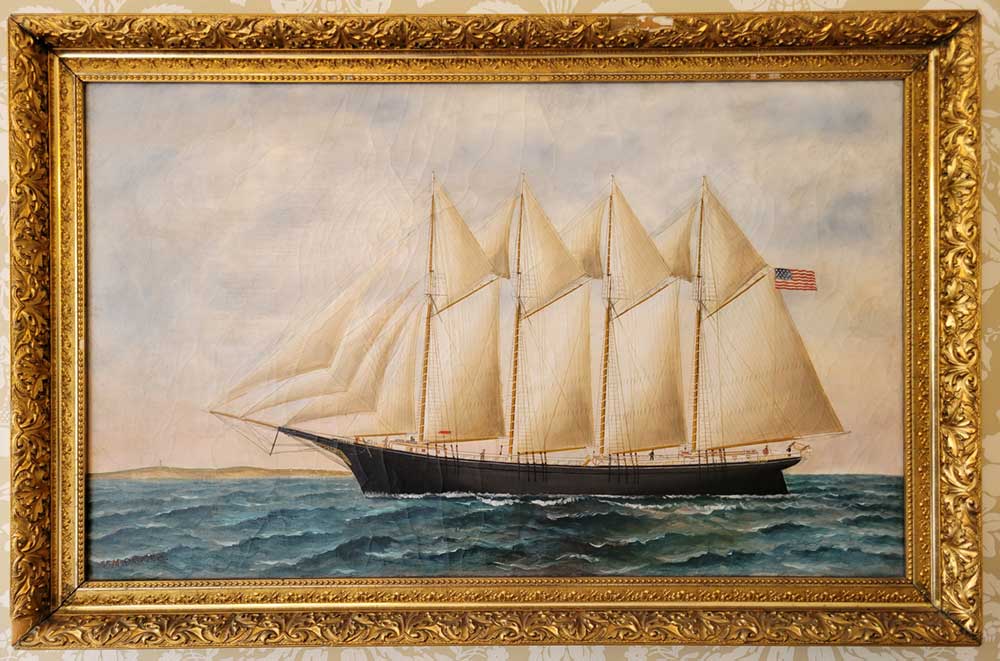 Solon Francis Monticello Badger (b. 1873, d. 1919) was a self-taught artist from Charlestown, Massachusetts. Badger’s father was a painter, but the younger Badger was apprenticed to work in a trunk factory. When the factory closed, he began painting ships. He painted the schooner Monhegan at least twice. The other painting was completed around 1892. Badger probably painted this at the same time, as the two works are very similar. The Monhegan was based in Bath. In 1902, it was traveling from Havana to Delaware with 10,000 bags of sugar when it wrecked on Molasses Reef off the coast of Florida. The crew was rescued, but the ship was a total loss. 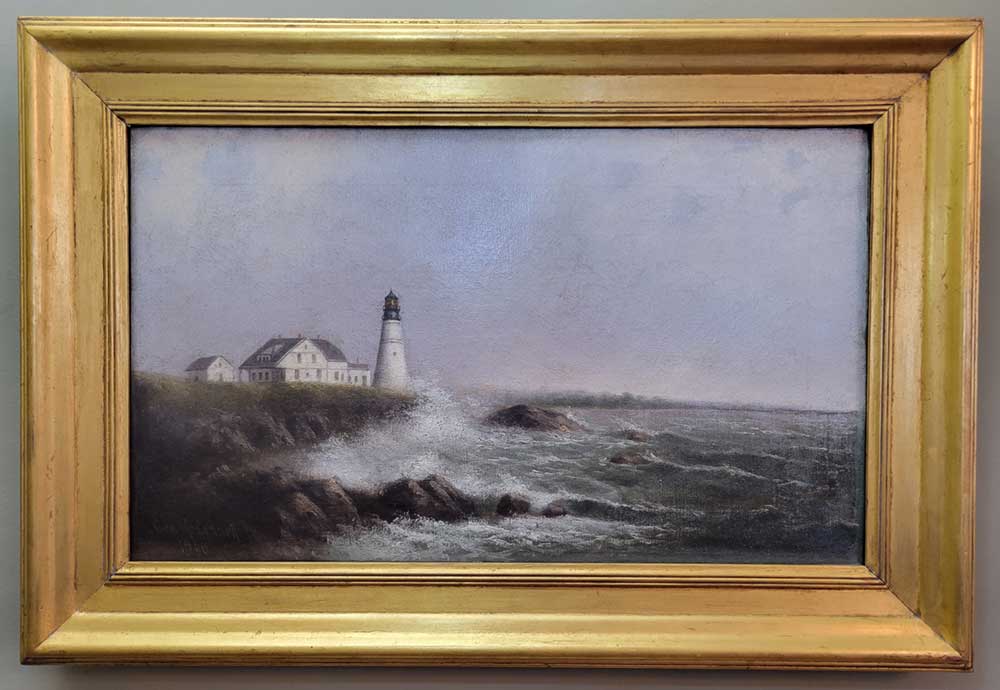 George McConnell painted Portland Head Light in 1900. McConnell was born in Ohio but moved to Portland, Maine, in 1883. He lived in Maine for the rest of his life, opening a studio and becoming popular for his landscape and marine paintings. 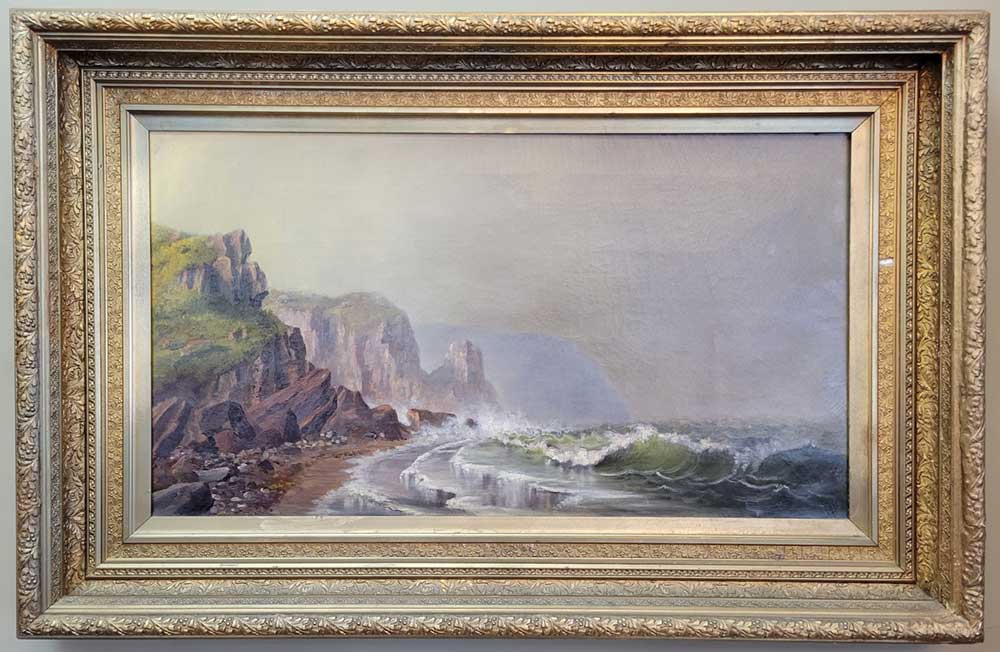 Harrison Bird Brown painted this seascape in 1877. Brown lived in Portland. Like his contemporary, Winslow Homer, Brown was well-known for his landscapes depicting the Maine coast. 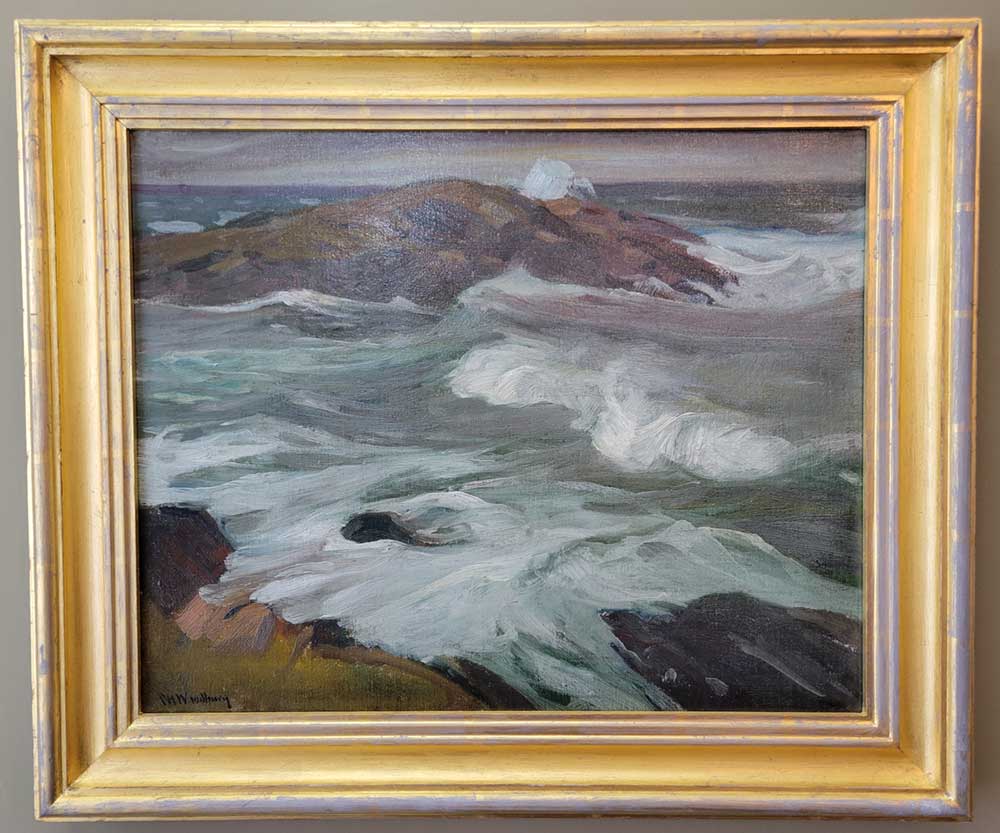 Artist Charles Herbert Woodbury had a successful career as a painter in Ogunquit Maine. He opened an art school there that taught artists from different parts of America and established Ogunquit as an influential community for artists. He was active in Maine from around 1896 until his death in 1940.

View of the Camden Hills 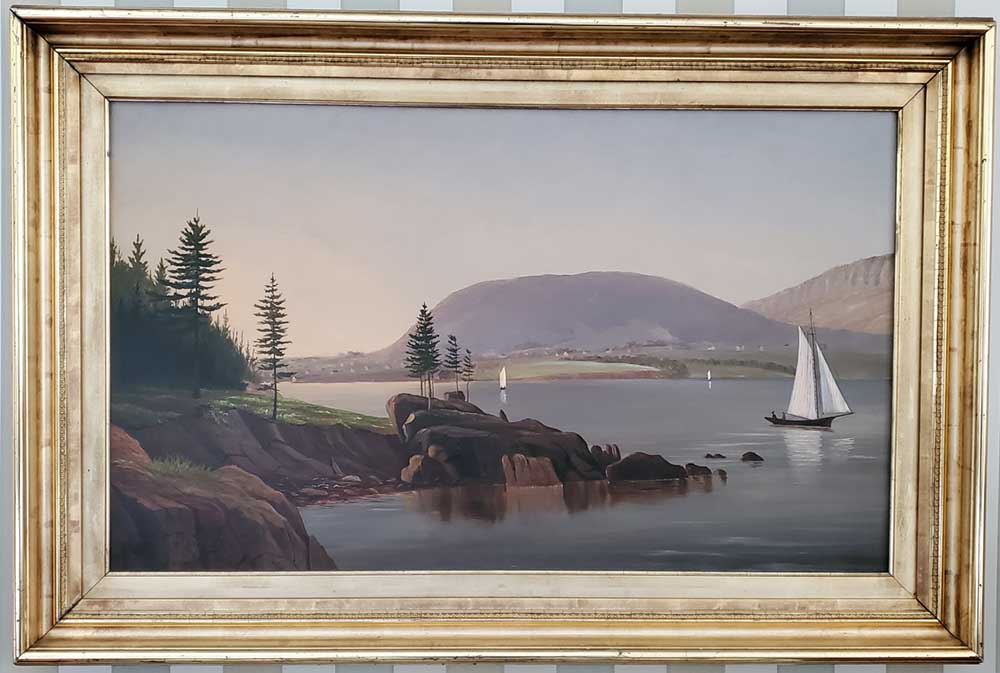 W.T. Bramhall was a Boston-area businessman whose avocation was painting. Very few paintings can be attributed to him. View of the Camden Hills dates to about 1860. Bramhall died around 1900. 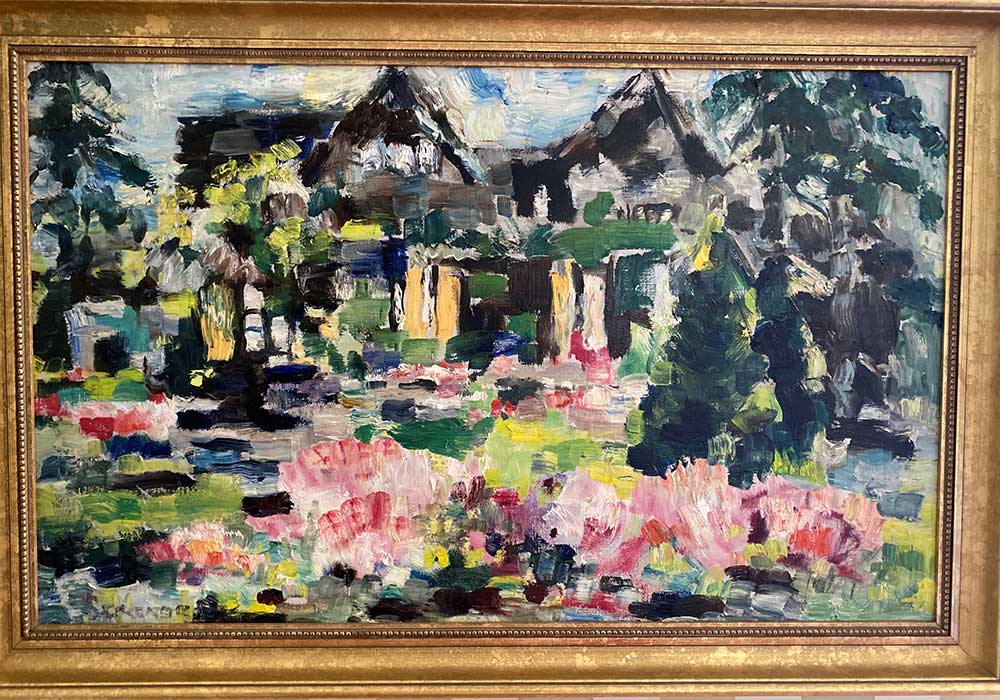 Adele Herter Seronde painted this house portrait around 1940. It depicts the garden and Bar Harbor home of Beatrix Jones Farrand, who was a landscape designer. Farrand was one of the most influential landscape architects in the United States during her lifetime.

In 1912, thirteen years after the close of the Spanish-American War, the Navy built a coffer dam and raised the USS Maine, sunk by an explosion in 1898. This photo of the wreck of the Maine was presented to Governor Lewis O. Barrows by State Rep. Walter A. Ayer of Union, Maine in February 1937. The photo’s frame was made from wood salvaged from the wreck.

The Navy patched the hull and floated the Maine and towed her out to sea. They sank the ship again, in 3,600 feet of water. The mainmast was sent to Arlington National Cemetery to serve as a memorial. 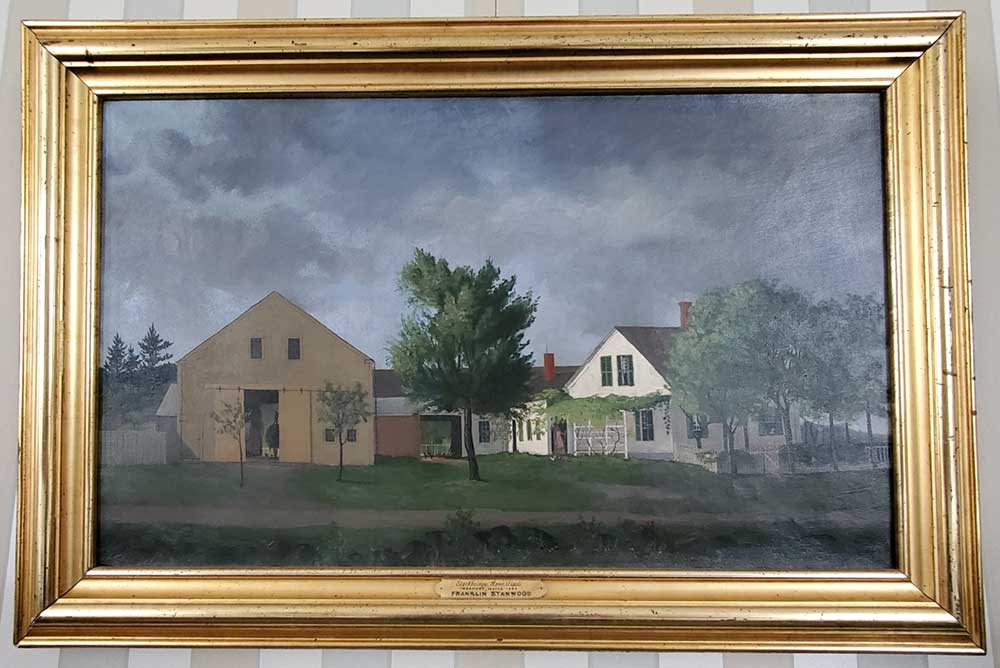 Franklin Stanwood painted this portrait of the Stockbridge homestead in 1880. Stanwood was born at the Portland Alms House in 1852. Captain Gideon L. Stanwood of Gorham and his wife Elizabeth adopted him as an infant. Several branches of the Stockbridge family lived in Freeport in the 1880s, including farmers Mikah and John Stockbridge. This may represent one of their homes. 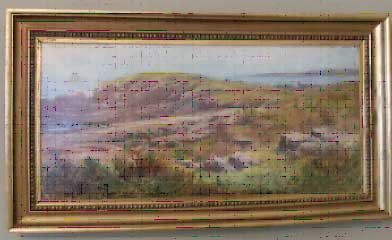 John Calvin Stevens created this oil painting of Cape Elizabeth in 1904. Stevens was an architect who was influential in Maine, designing many homes, churches, and commercial structures during the late 19th and early 20th centuries. Stevens remodeled the Blaine House between 1919 and 1921, to ready it for its new role as the home of Maine’s governors. 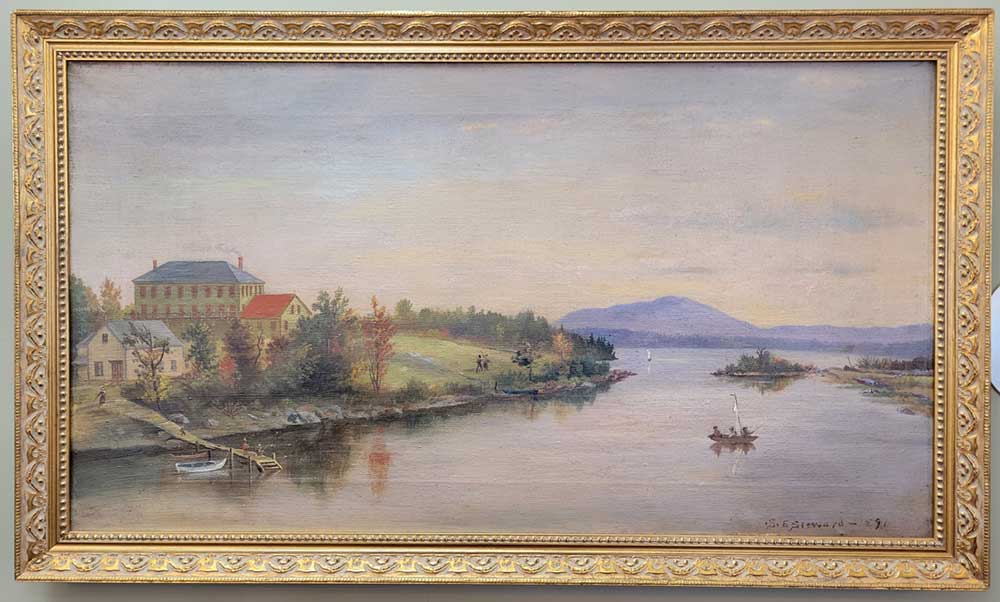 A native of Monson, Maine. Steward was, in his own words, “a painter, decorator, and artist in oil.” He also “hung paper and painted carriages.” Steward’s only formal training was from a Mr. Cameron, a California artist who spent his summers at Kineo, ME.

First Reading of the Emancipation Proclamation Before the Cabinet 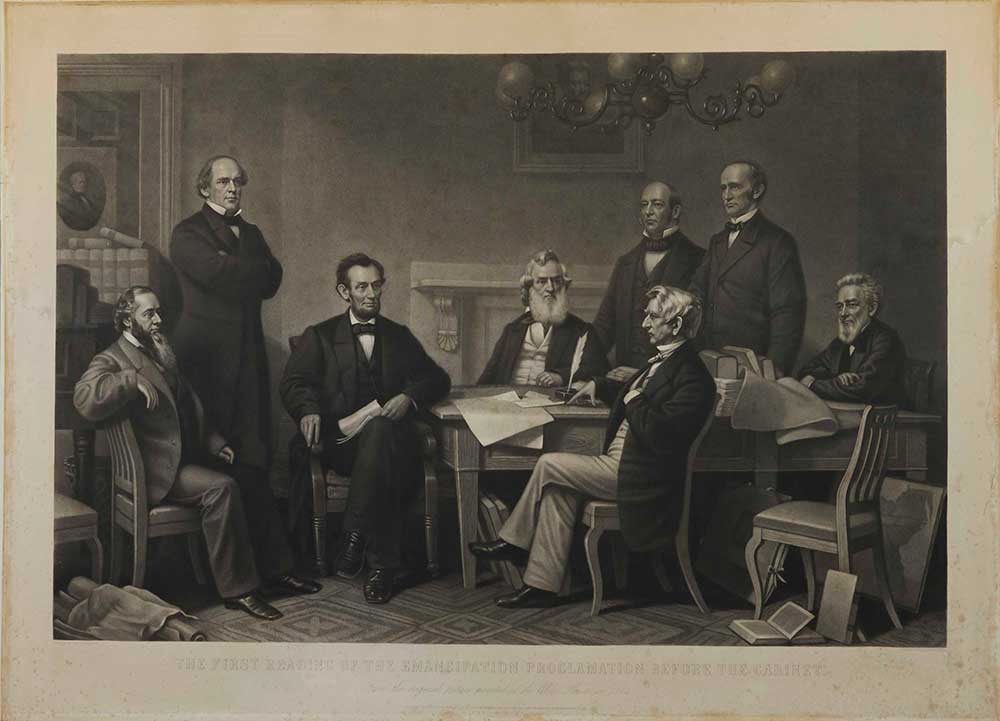 Based on a painting
by Francis Bicknell Carpenter
Circa 1866

The painting that inspired this print hangs in the U. S. Capitol. In it, artist Francis B. Carpenter portrayed the July 22, 1862 cabinet meeting in which President Abraham Lincoln presented the Emancipation Proclamation to his cabinet. Lincoln’s office is shown with battlefield maps on the floor, and books and papers on every surface. Carpenter lived at the White House for six months, sketching Lincoln and his cabinet, and using the State Dining Room as his studio. He completed the painting in 1864, and it was first displayed at the White House. Alexander Ritchie published his engraving in 1866. Blaine was the Speaker of the Maine House of Representatives at the time Carpenter painted the scene. He was elected to the U.S. House of Representatives that fall. 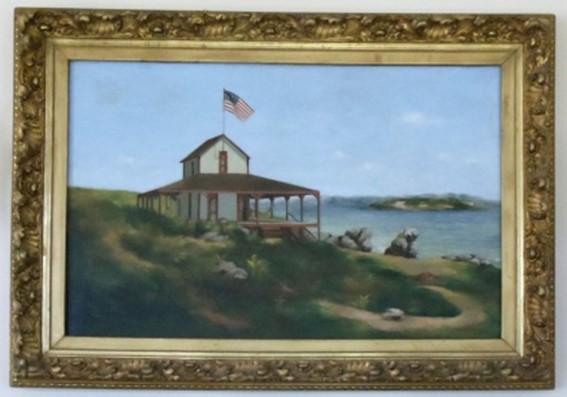 [Not Currently on View]

Agnes M. Leavitt painted this summer home on Peaks Island in 1887. Leavitt was born in Boston in 1859 and studied in Chicago. She eventually settled in California. House Island, in the distance of the painting, was the site of Fort Scammell, built to provide defenses for Portland Harbor during the War of 1812. House Island is visible from many of the homes and cottages in the village of Peaks Island. This cottage may still stand, but it undoubtedly looks different now than it did over a century ago.

Reflections after the Storm 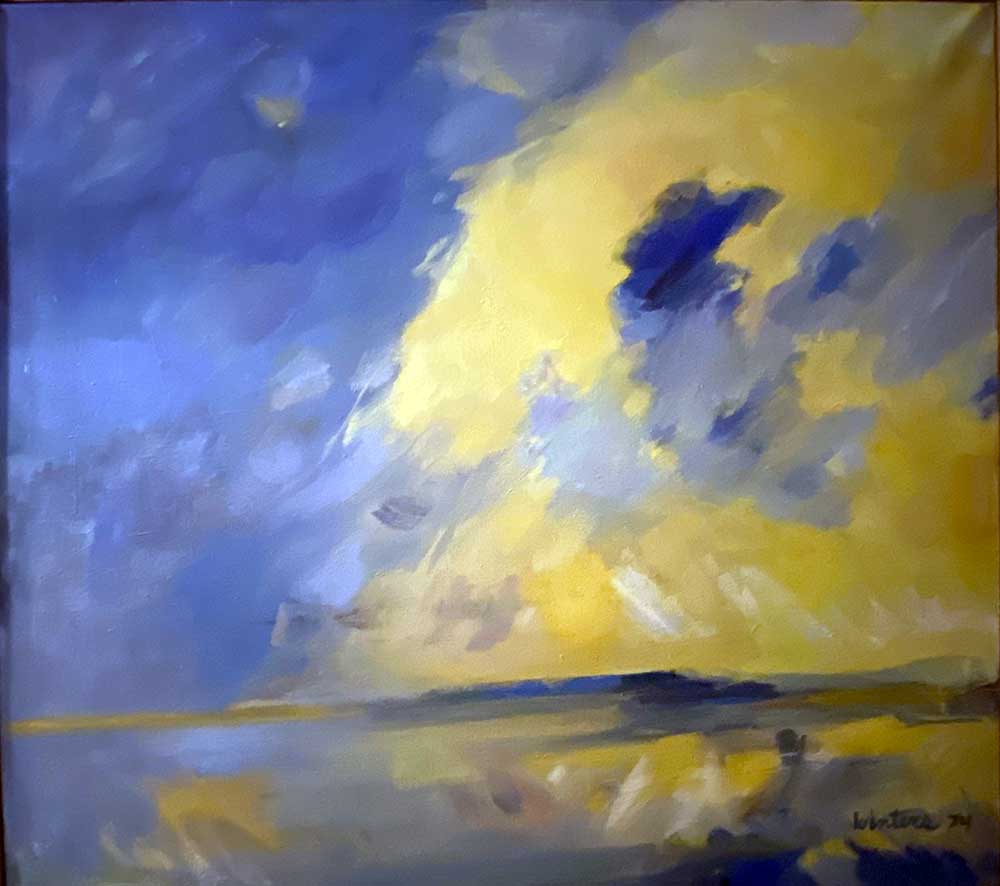 Denny Winters was a graduate of the Chicago Academy of Fine Arts and was a resident of Rockport, Maine from 1950 until her death in 1985. In 1973 she was the recipient of the Skowhegan Award for the Outstanding Resident Artist in Maine. Her work is included in the collections of the Colby College Museum of Art and the Butler Institute of American Art. 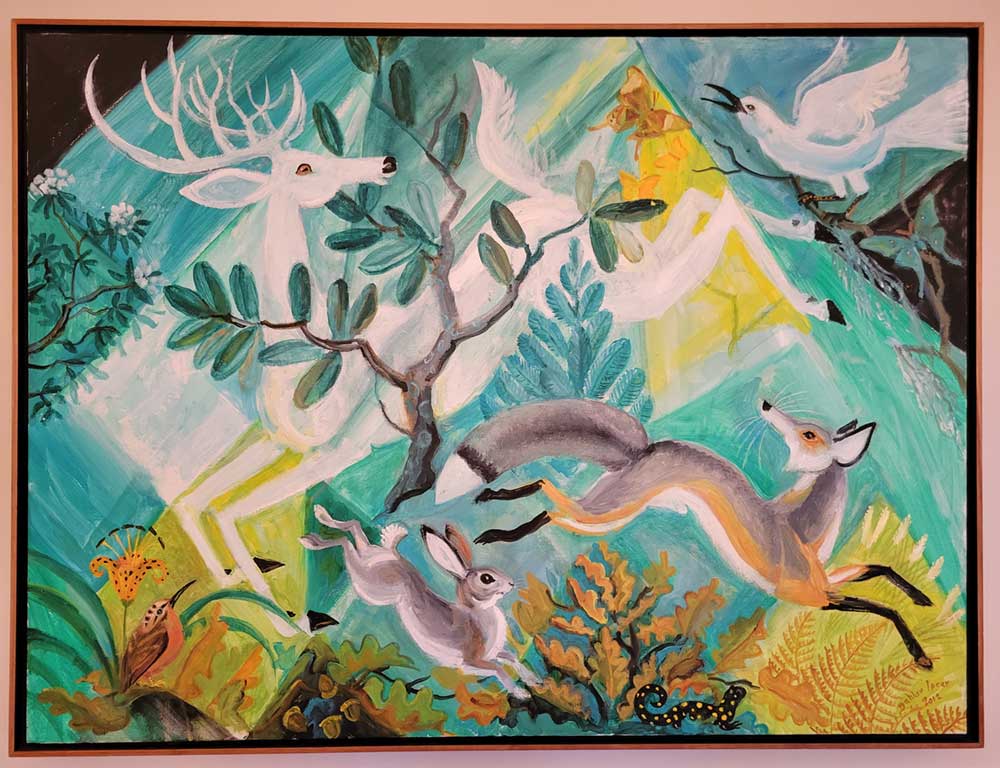 Beloved American painter, illustrator and author who spent most of her life living and working in Georgetown, Maine. She was best known for her colorful, kaleidoscopic-styled paintings featuring animals – primarily in either farm or wild settings. She passed away at her home in 2017 just shy of her 100th birthday. 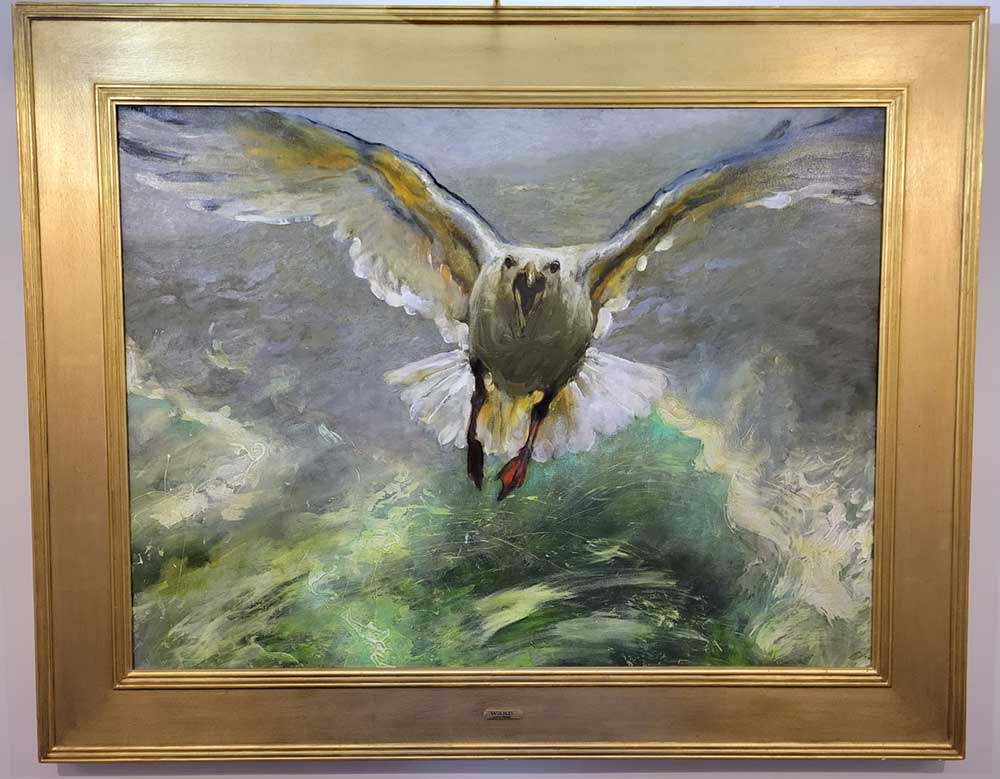 On loan from the artist James Browning Wyeth (born July 6, 1946) is an American realist painter, son of Andrew Wyeth, and grandson of N.C. Wyeth. He spends much of his time in Maine, painting on Monhegan Island where he celebrates the people, animals and landscapes of the Maine coast.