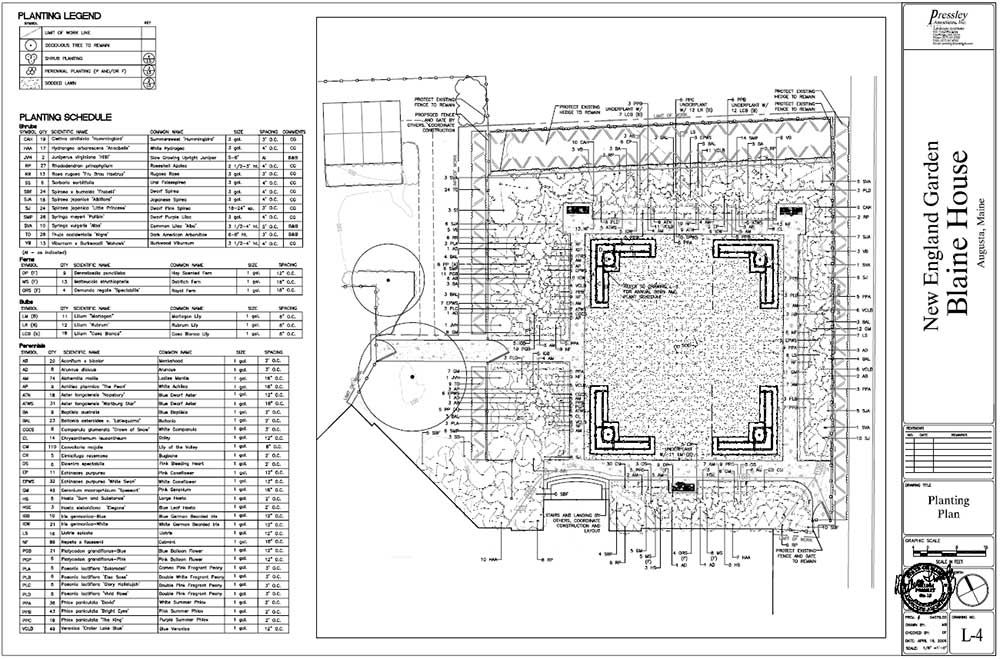 The New England Garden was re-envisioned and restored in 2006-2007 under the leadership of First Lady Karen Baldacci. The Garden design originated in 1920, when the Olmsted Brothers were retained to prepare a master plan for Maine’s State House grounds and Capitol Park, as well as a site design for the Blaine House. The site design included a rectilinear English cottage garden referred to as “The New England Garden.”

In 2006, Pressley Associates, a landscape architectural firm located in Cambridge, Massachusetts, was retained to adapt the 1920 Olmsted Brothers plan to the existing site conditions and construction codes while remaining true to the Olmsteds’ original design intent.

The New England Garden is a formal, square shaped traditional garden with a central lawn, surrounded by footpaths and fencing. Each corner features a flower display that changes throughout the seasons, anchored by topiary Japanese Willows. Granite benches, located along the perimeter, focus on the central lawn. One bench is dedicated to the memory of E. Chuck Cianchette of Pittsfield, who made possible the construction of the front entrance to the house. An entry landing and stair from the Blaine House Family Dining Room links the home’s interior with the Garden and is flanked by two large Lunaform urns crafted in Sullivan, Maine.

Plantings in the four central annual beds reflect the changing seasons, with each season exploring the various species’ unique attributes in a rich color palette of whites, deep pinks, purples & blues. Perennials range from phlox, lady’s mantle and historic peonies to bearded iris, ferns and viburnum. The annuals are appropriate to the 1920s when the Garden was designed such as cosmos, lobularia, nicotiana & snapdragons.

The New England Garden represents the third phase of a 20-year long effort begun to create the Friends of the Blaine House (FOBH) under Governor John McKernan in 1987 and continues today to repair and restore the Blaine House to its original appearance as the home of Maine Governors and their families and to exist in perpetuity as The People’s House of our great State.