In 2019, John Bunker, the famous Apple Orchardist of Maine, and Fedco Trees & Seeds began planting what will eventually be sixteen trees on the back end of the property. Each tree will represent a heritage, original varietal from each of Maine’s sixteen counties. The orchard serves as a gift to the people of Maine and the Blaine House on the 2020 occasion of the centennial anniversary of the home being gifted to the State. 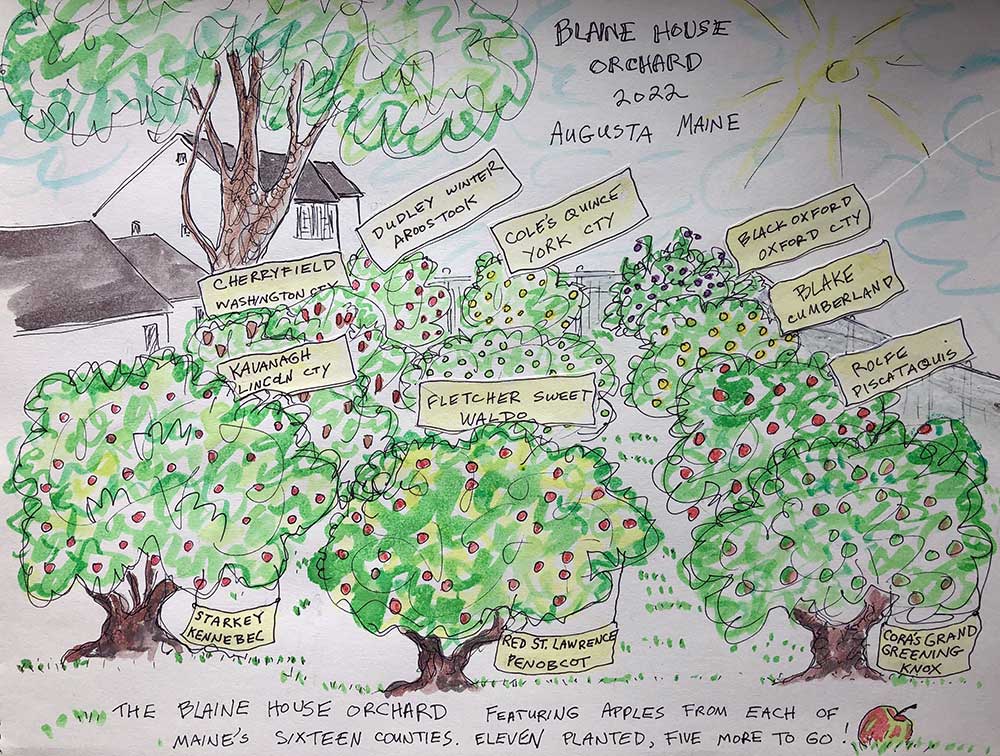 BLACK OXFORD Discovered by Nate Haskell in Plantation Number Four (now Paris), Oxford County, in about 1790 and introduced by John Valentine. Black Oxford was popular long ago throughout much of central and southern Maine as a long-keeping winter storage variety. The fruit gets sweeter as the months go by, best from late December to March. It makes excellent pies and sauce, practically until summer. With its medium-sized, round, deep purple-black fruit, you might think you’re looking at a huge plum tree. Even the flowers are an unusual light pink. Old trees can still occasionally be found in the southern half of the state; there are two in Hallowell. Many young Black Oxford trees have been planted in Maine in the last thirty years. Scionwood (grafting twigs) for the Blaine House tree came from an old tree on Appleton Ridge.

BLAKE Introduced by the Blake family in Westbrook, Cumberland County, in about 1869. Blake is a medium-large, roundish, yellow all-purpose variety that ripens in mid-late fall and keeps in the root cellar until early-mid winter. The fruit is medium-juicy, dense and quite good. Blake is mentioned in A.J. Downing’s classic Fruits and Fruit Trees of America, but few other references exist. It may have been exported as scionwood to England in the late Nineteenth Century. Blake trees have been found near Norwich, northeast of London. Although once grown throughout the Portland area, it is now extremely rare. The scionwood for the Blaine House tree comes from a tree discovered in Windham. The “Windham Blake” fits the description well, but it may be years before we can make a positive identification.

CHERRYFIELD (also called Collins) Introduced by Wyman B. Collins of Cherryfield, Washington County, in about 1850. Cherryfield is an all-purpose, fall-winter apple that was popularized by David Wass Campbell of Cherryfield, and Welton Munson of the University of Maine. The fruit is medium-large and conic-shaped, washed and striped with pink. It ripens in October and keeps until early spring. Cherryfield is very good for fresh eating. It makes excellent sauce and a highly flavored pie. It’s also good in salads and sliced up on pizza. A few old trees have been found in Washington and Hancock counties. It may also have been grown in Kennebec County under the name Benton Red; the two varieties are very similar. Scionwood for the Blaine House tree comes from an old tree in Cherryfield.

COLE’S QUINCE (also called Quince of Cole) Introduced by Captain Henry Cole of Cornish, York County, in about 1840. Nine years later, his son, S.W. Cole, featured the new variety is his famous pomological publication, The American Fruit Book. “Cole’s” is an all-purpose summer apple that ripens over a few weeks, popular for pies and sauce. The fruit is large, flattish-conical, ribbed and bright yellow, sometimes with a brownish blush. It was presumably called Quince because of what old books call its “rich, high quince favor,” or maybe because of its shape and coloring. It even looks like a quince. The variety was historically grown throughout much of southern and central Maine, as well as scattered locations out of state. There are currently no known old trees left in Maine. Scionwood for the Blaine House tree came from the collection of John Bunker.

DUDLEY WINTER (also called North Star) Probably originated from a Duchess of Oldenburg apple seed, pollinated by Hyslop Crab, planted by Mary Dudley in about 1870. Introduced by her husband, John Wesley Dudley, Castle Hill, Aroostook County, 1880. Dudley Winter fruit is medium-large, red-striped, red-blushed and slightly ribbed. It’s best used for pies, sauce and other cooking. The apple became popular in northern Maine as one of the few storage varieties hardy enough to be grown in The County. Old trees can occasionally be found in northern and central Maine. “Dudley” also became popular in Canada and in northern districts of New Hampshire, Vermont, New York and the upper mid-west, often under its synonym, North Star. Scionwood for the Blaine House tree came from an old orchard in Westmanland.